I roadied for our bassist Mick Wilson and his bandmates in Red Bazar and Tiger Moth Tales last weekend on a long road trip to The Netherlands and back. It was great fun, and a great gig was had.

Two things stood out for me. The first was that I was reminded of what an incredibly dedicated bunch they are. Mick, Andy and Paul have been plugging away for many years now, never giving up, even when it seemed impossible for (what was at the time) a small, instrumental band to get any attention. They have a disciplined rehearsal schedule (twice a week) which they keep up all the time, as well as all the writing, recording and mixing they do, and day jobs. Peter goes along with this too, and even when he’s away doing his other stuff the other three keep rehearsing. As a result they are super-tight, and they really reap the benefit of that when they play gigs.

Peter works very hard too, he’s constantly slogging away with smaller gigs to pay the bills, as well as long international tours with the likes of Camel.

So they’ve clawed their way up the prog ladder with their bare hands, and now they’re on the verge of bigger things, and they fully deserve it.

The other thing that stood out for me was the venue, the Boerderij (‘The Farm’) in Zoetermeer in The Netherlands (Zoetermeer is right in the middle of Rotterdam, Amsterdam and The Hague, which are all fairly close together). It was very well designed place. You turn up and you can park the van right next to the loading doors. You’ve only got to move the gear a few metres. The stage is large, and easy to access. The gear is all top-notch (a Midas PA, and the DIs are all BSS, no cheap hissy Behringers here.) The lighting rig is amazing. There are dressing rooms, with drinks fridges and comfy couches. There are plenty of bars. There’s a large-screen in the other bar (away from the main gig hall) which screens the concert for those who can’t squeeze into the gig hall with crowded gigs. The toilets are clean. Basically, the opposite of most of the venues in the UK that we’ve played at (although admittedly we have mostly played the lower end of venues).

There’s also loads of staff and stage crew there, many of them volunteers. And what young person starting out in sound wouldn’t want to volunteer to work there — so much great gear, and great people to socialise with? Everyone there was, as well as being knowledgeable and highly competent, really nice. Even the owner came and had a few beers with us afterwards, despite the fact that he is used to much bigger bands most of the time. He said he wants to help out smaller bands and not just have every gig be a big act (like Steve Vai, who is playing there in a few weeks), and he’s doing that, not just talking about it.

It was like a dream venue. Even the food was great. It’s on my list of places I want Coralspin to play before I die, and any other band should add it to their list as well.

As far as Coralspin goes, it’s going to be a while before anything happens as I’m bogged down with various things — mainly work and paying bills — and so is Ellie. Jake is less busy and has done most of his guitar parts for the second album; he’s not the one holding things up.

If you’re in the East Midlands then get yourself along to this gig. Mick says he might wear a donkey, so I’m hoping he does!*

*I suppose he may have meant donkey jacket. But if that’s what he meant, I shall make him eat all the straw I’m bringing.

While we’ve been struggling for time over the last few years our bassist Mick has been very busy with his own band Red Bazar. Those of you who already know them will remember them as an instrumental prog-power trio. Well, now they have finally got a vocalist. And a keyboard player. (Actually, if you already knew them you probably already knew that.)

Not just any vocalist, though, but Peter Jones, recent winner of Classic Rock Society’s Best Newcomer Award, and the man behind Tiger Moth Tales. And on keyboards Gary Marsh, a real find.

They have just released an album called Tales From the Bookcase, a great mix of modern and classic prog. I really loved their old instrumental stuff, but having vocals and keyboards in the mix has produced a sound that is much more accessible for the average listener, and this album is already getting rave reviews all over the prog world. We already knew that Jones is a really good progressive singer, but on this album he shows at times that he a match for Ronnie James Dio when it comes to hard rock wailing. And Gary Marsh proves himself to be a great texturalist keyboard, almost as good as that sort of thing as that guy from Coralspin…

I suggest you buy it now, but if you want to quickly check it out beforehand you can do so at Bandcamp. 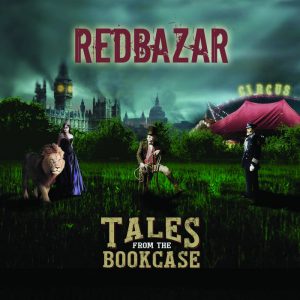 Red Bazar – Tales from the Bookcase

This machine is fantastic. And I love the track too.

The genuises at Rhythmic Robot have released an amazing new virtual instrument called Silencio. I’ve already used it this morning to make a new track — in fact, you’re listening to it now.

In a world of loudness wars and over-crammed mixes, what our music sometimes needs is space to be; the individuation and clarity that come from the absence of sound; in other words, contrast. Silencio brings you that contrast in pristine 24-bit quality, whenever and wherever you need it.
Comprising eight meticulously-recorded silent environments (six analogue and two digital) plus hard bypass, Silencio gives you instant access to different tonalities of silence across a full 88-key range. A comprehensive control set allows further tailoring of the core silences. Its uses are limited only by your imagination, but there are some standout applications:

• Perfect for adding space to a mix. Today’s mixes easily become crowded, with frequency bands jostling for attention and fatiguing the listener. Use Silencio to bring air and space to your mix. Just one or two tracks of Silencio can make all the difference.

• Ideal for Jazz musicians. We often hear jazz aficionados saying of great musicians that we should ‘listen to the notes the guy isn’t playing’. This is central to classic jazz soloing. With Silencio, you can play these notes directly.

‘What we cannot speak about, we must pass over in silence’
– Ludwig Wittgenstein

Not much of a song, and the sound quality is poor, but it’s amusing to see Wyatt, Ayers and Ratledge in full 60’s poseur mode:

The Robin Thicke/Pharrell Williams vs Gaye estate verdict is a complete joke. The judge said that the case was to be decided on the ‘sheet music’ aspects of the song, and they are completely different. Different melody, different harmony. You can’t play those two songs on a piano and say one’s a copy of the other. That’s rubbish.

Of course Thicke and Williams ripped off the vibe. You don’t need to be a musician to tell that. The whole feel of the song, the drum beat, the electric piano sound (and a bit of the e. piano bassline), the high vocal, the party atmosphere in the background, they’re obviously all very similar, and you might feel that Thicke and Williams deserved to lose for that reason alone. But decisions like this don’t just concern those in the trial, they concern every composer in the world. If two songs that are so dissimilar are said to be copies, then disaster lies ahead. I really hope this verdict gets overturned on appeal (I’ll be amazed if it doesn’t). It never should have gone to trial. Why didn’t the court consult some compositional experts beforehand, who could have told them to throw it out?

Bob Stanley has a good article in The Guardian about this.

I was also amused by this article. In it, E. Michael Harrington from the SAE Institute (one of the best sound engineering schools) says the verdict is a bad one. For the other side of the argument the journalist turned to… the Gaye estate’s lawyer!

Update: Apparently the Gaye estate had some musicologists in who testified that the ‘sheet music aspects’ were very similar. Looks like Thicke and Williams made a big mistake in not getting their own musicologists in to testify that this was BS.