Coralspin mastering engineer Ray Staff has been short-listed for The Music Producers Guild Mastering Engineer of the Year Award. We expect that this is almost entirely due to his great work mastering Honey and Lava. Possibly some of the other albums he did may have helped, but not much, I would have thought.

One of the ‘brave’ decisions we made with Honey and Lava was that we didn’t apply much limiting at the mastering stage. This is the process by which the overall volume of a track is raised. Such limiting is very popular with modern CD production, but it has a significant drawback. Any digital file has a maximum volume it can achieve at any given moment, so what this limiting does in effect is to squash the signal into this ‘ceiling’. Overall there is more volume, but the side-effect is that you no longer have the original contrast between loud and soft notes and passages that you originally had. This lack of ‘dynamic range’ is one of the main reasons why it’s hard to listen to modern CDs for more than a few songs before your ear becomes fatigued and your brain becomes bored. Albums mastered in the 70’s, for example, typically don’t have this fatiguing effect.

Everyone in the industry says that the way to stop these ‘loudness wars’ is for record companies and bands to stop making their CDs so loud. But nobody wants to be the one with the CD that isn’t as loud as its competitors. Well, we decided to be one of the few bands that makes that choice. So we only used a small amount of limiting in order to preserve the dynamic range of our music. The result, we think, is a much better-sounding album. If you want more volume, you can just turn up your volume knob! That’s what it’s for.

The problem, however, is that when our tracks appear on a small radio show, or a podcast, they sound very soft in comparison to the other tracks which have all been mastered in the modern way. The other tracks will jump out of the speakers, but ours can barely be heard. This doesn’t happen on commercial radio, of course, because commercial radio stations apply their own limiting so that all their tracks are playing at roughly the same volume. But smaller radio shows and podcasts generally don’t apply limiting, and our songs suffer as a result.

To solve this problem we’ve produced some louder versions of our tracks with more limiting on them. So if you have a radio show or a podcast and you don’t use a limiter and you want to play one of our tracks, we’d be very grateful if you could use one of these louder versions. This isn’t just for our benefit, it’s for yours as well, as it will sound better for your listeners, who don’t want a track to come on that they can hardly hear (nor do they want to be having to turn tracks up and down every few minutes).

Get in touch for a download link. Alternatively we are happy to send out a CD to you with these tracks on for free.

The elves have visited and told us to get with the sales spirit, and as they had guns we didn’t want to resist. So for two weeks only we’re selling CDs of Honey and Lava at half price. That’s £4 (including delivery) for the UK, and £5 (inc. delivery) for the rest of the world.

Only available via the Coralspin website store. Sale ends on Thursday Jan 3.

If you’re a French speaker then get a copy of the latest issue (#85, Dec 2012) of this great French prog magazine Big Bang, featuring Steve Hackett, Marillion, Ian Anderson, Neal Morse, Threshold… and us (article and interview). 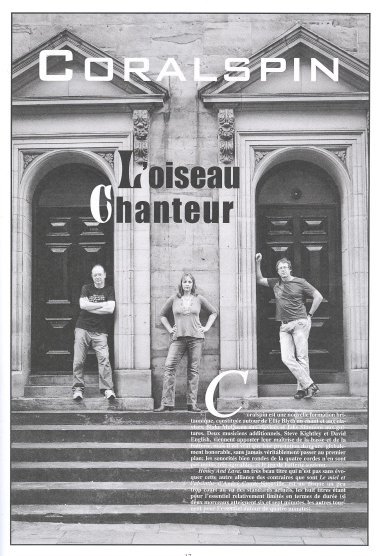 Yes, somehow we managed to crack the top ten there with Honey and Lava, at least on main man Brad Birzer’s best-of list. Not bad for a self-financed, self-produced/recorded/mixed album by a bunch of unknown amateurs (two of whom have gammy legs from the war).

Eight. Coralspin, Honey and Lava. Blake McQueen is a master. The production on this album is outstanding, as it plays out the big sounds of Trevor Horn and Trevor Rabin. Soaring and rocking in every way; the lyrics are quite good, too.

What’s more, Brad says 2012 was the best year ever for prog. His call, not mine — you’d think that our presence there automatically invalidates that claim! I haven’t actually listened to a lot of the material on that list, but I do love The Fierce and the Dead’s On VHS mini-album. Will have to check some of the other bands out. (I am of course a big Rush fan, but haven’t got around to Clockwork Angels yet, only up to Snakes and Arrows).

I’m probably going to get into trouble for this, but what the hell, it’s time the truth was told and a few inflated reputations exploded, and it’ll be out in the media soon enough anyway.

Ever wondered how your favourite guitar hero manages to sound so masterful on record despite looking like they’d have trouble understanding the point of a fence-post? To move closer to home — I’ll name no other names as I don’t want to black-balled by the entire industry — how is it that Coralspin’s Jake Simmons manages to solo like a God while in reality being the sort of man who would rather spend his day vandalizing train tracks than practise his instrument? The answer lies in the modern studio’s ‘little helper’ applications, the main culprit in this case being the Phoenix Pro — here’s a clip of it in action:

The hot new US prog site Progarchy has an interview up with yours truly which you can read here. Apologies in advance for my waffling on. Thanks to Brad Birzer for asking me, and for asking the questions.