We now have a new ‘session’ rhythm section lined up for gigs and the second album. And they’re awesome!

On bass we have Mick Wilson from our fellow proggers Red Bazar: 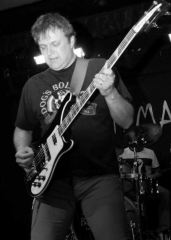 On drums we have Ed Gorrod: 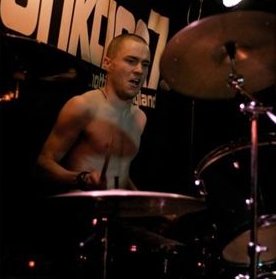 Ed also plays with prog band Stuntmen, as well as metal band Bloodguard. He has promised to not go topless for Coralspin gigs.*

Rehearsals so far have been amazing, and we’re now looking for gigs from February 2013 onwards — get in touch if you’re interested in booking us.

*He will instead be performing completely naked.

There’s a profile of us in the ‘Limelight’ section in issue 31 (Nov 2012) of Prog magazine (out in newsagents in about a week, maybe less). Thanks to Sarah Worsley for the very entertaining interview, Russell Fairbrother, Prog’s art guy, for the nice layout, and Roley for the help. And thanks again to Dom Henry who we got to do the photo. 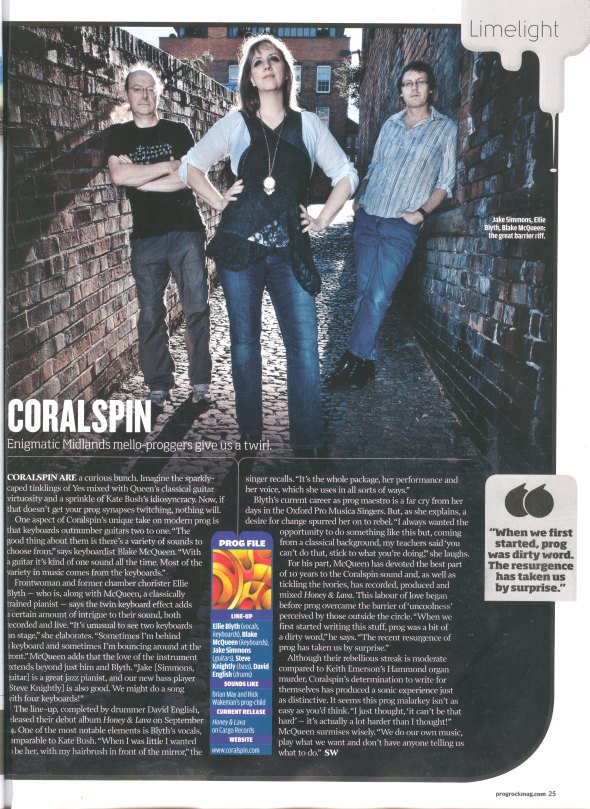 Enigmatic Midlands mello-proggers give us a twirl

Coralspin are a curious bunch. Imagine the sparkly-caped tinklings of Yes mixed with Queen’s classical guitar virtuosity and a sprinkle of Kate Bush’s idiosyncracy. Now, if that doesn’t get your prog synapses twitching, nothing will.

One aspect of Coralspin’s unique take on modern prog is that keyboards outnumber guitars two to one. “The good thing about them is there’s a variety of sounds to choose from,” says keyboardist Blake McQueen. “With a guitar it’s kind of one sound all the time. Most of the variety in music comes from the keyboards”.

Frontwoman and former chamber chorister Ellie Blyth — who is, along with McQueen, a classically trained pianist — says the twin keyboard effect adds a certain amount of intrigue to their sound, both recorded and live. “It’s unusual to see two keyboards on stage”, she elaborates. “Sometimes I’m behind a keyboard and sometimes I’m bouncing around at the front.” McQueen adds that the love of the instrument extends beyond just him and Blyth. “Jake [Simmons, guitar] is a great jazz pianist, and our new bass player is also good. We might do a song with four keyboards!”

The line-up, completed by drummer David English, released their debut album on September 24. One of the most notable elements is Blyth’s vocals, comparable to Kate Bush. “When I was little I wanted to be her, with my hairbrush in front of the mirror”, the singer recalls. “It’s the whole package, her performance and her voice, which she uses in all sorts of ways.”

Blyth’s current career as prog maestro is a far cry from her days in the Oxford Pro Musica Singers. But, as she explains, a desire for change spurred her to rebel. “I always wanted to do something like this but, coming from a classical background, my teachers said ‘you can’t do that, stick to what you’re doing,'” she laughs.

For his part, McQueen has devoted the best part of 10 years to the Coralspin sound, and as well as tickling the ivories, has recorded and produced and mixed Honey and Lava. This labour of love began before prog overcame the barrier of of ‘uncoolness’ perceived by those outside the circle. “When we first started writing this stuff, prog was a bit of a dirty word,” he says. “The recent resurgence of prog has taken us by surprise.”

Although their rebellious streak is moderate compared to Keith Emerson’s Hammond organ murder, Coralspin’s determination to write for themselves has produced a sonic experience just as distinctive. It seem this prog malarkey isn’t as easy as you’d think. “I just thought, ‘it can’t be that hard’ — it’s actually a lot harder than I thought!” McQueen surmises wisely. “We do our own music, play what we want and don’t have anyone telling us what to do.”

Sounds like: Brian May and Rick Wakeman’s prog child.

The “devoted ten years to the Coralspin sound” is true in that about ten years ago (actually it was about 8 really, but I said 10 for some reason), I started putting my studio together, started learning how to record and mix, and started writing Coralspin-like songs, and Ellie did too. I was a bit vague about this to Sarah because Coralspin’s origins are themselves a bit vague, it’s just kind of evolved gradually over time, with many other things getting in the way. So I think “devoted ten years to the Coralspin sound” is quite a good summary by Sarah, seeing as how hazy I was about it all.

When I said “I just thought, ‘it can’t be that hard’ — it’s actually a lot harder than I thought!” I was talking about recording and mixing here, not doing prog. My fault for not making that clearer. We did have a marvellous time talking to Sarah (she’s great, by the way) and I got a bit carried away and didn’t always make myself as clear as I could have done, preferring instead to amuse her and Ellie with wisecracks.

“With a guitar it’s kind of one sound all the time. Most of the variety in music comes from the keyboards” — this was a bit of a tongue-in-cheek dig at guitarists, but of course it is an overstatement, so don’t shoot me for it! Some truth in it, though.

The printed text says Steve Knightley — actually it’s ‘Kightley’ — is our new bassist, but in fact he’s our old one, who now lives in Bedfordshire (he’s looking for a new rock or prog rock band to join if anyone is interested). We’ll be introducing a new rhythm section hopefully pretty soon.